Sometimes, seeing the future can be a terrible thing 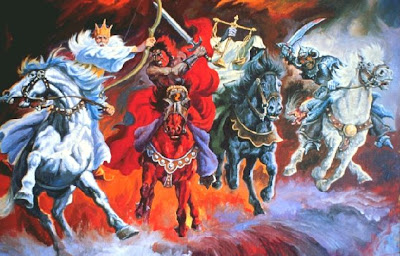 Growing up in London, then Tokyo in the early 50's I saw the spirits of those who had died in the war. Then my little brother died of cancer and I had to ask what happens to us after we die?

Learning about other dimensions helped, then to speak with the spirits of those dead, helping them to heal. I was inspired to learn Astrology, which led to Psychism, then Magic. I saw the wisdom contained, yet locked away within religion. We exist in multiple dimensions and religion only provides simplistic linear answers. If we truly could see the wisdom of prophecy it would be this, that prophecies are born in particular intersections of time and space, but we are beings that can transcend time and space.

If we transcend our material senses, and go beyond what we can see, feel or hear, we can see many other realms, and evolve into an alchemy of spirit. If you see that you have freedom of will, yet are bound by your limitations, then you can learn from karma, and overcome those limitations, and you can have peace.

So I started advising and counselling people from the age of 16, not fortune-telling, just what might happen if they didn't change, then showing how they might change events, if they wished.

Then because it wasn't enough to tell people what might happen, I taught a form of meditation from 1972 on that brought peace as people learned to stop that chatter of the mind.

I was a spiritual teacher, but a quite one. Let other Indian gurus come and go, as they fell to their egotistical wish for fame and money. I wouldn't proclaim anything unless I, and the world, was ready. But others saw, and proclaimed me; London in 1977, Los Angeles 1993-94, Toronto and the U.K. after that.

I was in Los Angeles because there was going to be a huge earthquake in which hundreds of thousands of people would die. That didn't happen, but I learned that some things were meant to, and would, happen. Not an easy thing to know.

Flying back from Sri Lanka in 1995, I flew over the islands of the Indian Ocean, and saw a vision of a tidal wave sweeping all before it. This happened in the tsunami of December 2004.

A fellow doctor I met in Sri Lanka who I had given healing to was arrested as soon as she arrived back in London; her boyfriend whom she had left her children in charge with had been plying them and the neighbourhood teens with drugs and alcohol in exchange for sex. My healing brought out her karma, and all the things she refused to see, which she needed in order to heal. And that is what my healing is about, whether for people or the world.

I knew, towards the end of my 1993-1995 visit to the U.S., that I would be needed in New York. I also saw that people weren't ready for the next step, and my family needed me. So they went back to Canada, and I went to Asia for a while. Then when I came back, we toured Europe, where I did my spiritual work, then returned to Canada.

I did go back to the U.K. in 1999 to see the solar eclipse, and the path of the eclipse, from New York to Gujerat, India, saw 9/11, earthquakes, floods and the second Intifada. Floods and further earthquakes ensued, and I tried to help, till I gave up trying. If things must happen, then they must, whether with friends or nations. I warn, then I move on.

I blessed the people of California who had helped me, but then, I had to move on after 2001. There were some who thought there would be a huge disaster in London in 2005 and actually published, in an online forum, that I would be there. People didn't understand. Then, the London Tube bombings took place just outside my friends home so they actually heard it, luckily they were saved.

Some predicted the deaths of Castro of Cuba and Iranian leader Ayatollah Khamenei and I said no, that would not happen, since it would lead to untold misery. They survived their illnesses.

I published a letter predicting the current events in Israel, and another where I said there would be no attack on Iran. And that was actually conditional, in my mind. I had to actually go there to heal the earth, or there would be a war in March of 2007, and a disastrous earthquake in Teheran which might kill millions. Be clear on this, it isn't a threat or a punishment. It's the way things are. When I got there I did heal the earth, as I did in California, as I did in the U.K., but remember, sometimes those changes are necessary.

So I went to Iran in March of this year. There was a minor earthquake in Bam (before I left I told my hosts we could go anywhere but Bam) but not Teheran, and there was the British sailors hostage crisis while I was there, which the Americans wanted to use as a pretext for war, but the British PM opted for diplomacy instead. Make this clear, I saw hundreds of people for healing and meditation, and to each of them I said, I was the hidden Imam, meant to unite the Muslim people, even if I wouldn't be quite what they expected. They could believe or not believe, the choice was theirs.

Then I brought my family for a long overdue vacation to the U.K. in July. A week before we landed in Glasgow, someone tried to set off a car bomb in the airport there. It had rained for three months solid. That stopped the day we arrived and we had glorious sunshine. We went up north to Scotland and the sun came out wherever we went.

Then when we got back to the Lake District it started to pour again, and the rivers flooded over their banks. Driving south to Devon, it was as though the M5 highway was a bridge over a vast lake of water to the horizon. The biggest floods in a century. When we arrived in Devon, we had lovely sunshine all the way till we drove back from Cornwall to Glasgow to catch our return flight. As soon as we crossed the Scottish border, it started to rain again, then cleared when we caught our flight. Floods and earthquakes are not things to be feared, since they are the means by which the Earth will be brought back to balance, sorry.

And then I went back one more time to the Lake District in October, to help a friend start a spiritual healing centre. We had regular meditation classes, and hundreds again received the gift of healing.

I'm back in Toronto, for a new beginning. Huge shifts have taken place, and this is the future as I see it. I have to establish a new base in or outside of Toronto, and decide my next step. Do I start my private medical practice again, or do I focus on my spiritual work and writing? I know what my heart would like, but this is the ultimate peace: I don't have to know the future. What will be, will be. My family and I will be all right, and the future is ours to mould.

Sometimes, seeing the future can be a terrible thing

The arc of spiritual experiences of my childhood went like this: seeing (and suppressing) memories of my past lives, seeing energy fields of people and spirits, seeing the future.
An aunt of mine, knowing of my abilities, asked me out of the blue, once, “will I ever be happy?” and I went into the space of knowing, then saying “No.” That was 20 years ago, and I felt so terrible about that I stopped giving readings for a long while. I did explain to her the proviso, “If you continue on your present path, yes, you will be unhappy.” Since she could not, and would not change, what I said came to pass.
Yet I knew I could only warn people, and try to help, and do the best I could. This brings me to what is happening in the United States. Since 1989 I have made 11 extensive trips there, and there was much joy. I met and made so many friends, and yet: I saw some things were going to happen, I could make a difference but people would have to make difficult choices before they could change.
There was a person, in my last trip, whom I saw making all the wrong choices in her life. She couldn’t understand what I was offering her; I couldn’t be more specific about what I saw without taking away her freedom of choice. I tried to help the people of New York before, and after, 9/11, and that didn’t happen.
This is what I said on my website, back in 2001:
“Evil cannot be permitted to continue. I am Krishna and say this to you, Arjuna, when all the evil in the world exceeds the good, I will incarnate to bring the world back into balance. But remember this, I come as Kalki the destroyer, and whatever has to happen, will take place. And if Earth Changes are required to bring about harmony, let them take place.
What can you all do? Find a spiritual peace inside you, and change yourself for the better, and if a stranger says follow me, then do so. I am he that the world has waited for. Follow me. Help me change the world. Let there be peace, love, and joy.”
Since that time, I’ve sent hundreds of e-mails (I especially refer you to my “Journey of a Healer”) with a basic theme of warning, need for healing, and hope. The Asian Tsunami foreseen by me was another warning sign, and now, Hurricane Katrina in the U.S. And it will get worse, especially in the U.S. until people change and no longer accept the injustices done in their name. You all have a karmic burden you have not even begun to repay.
This is not easy for me to say. I have so many friends all over the world and do not wish harm to come to anyone. I have tried to help, but know people must change first. There is too much fear and rationalizations taking place and now certain events have been set in motion that cannot be rescinded.
There is a spiritual wave taking place which will sweep everything before it. I offer help, but there is a heavy price you will have to pay. Make a leap of faith, do not be afraid.
Naseer Ahmad
c- 2005