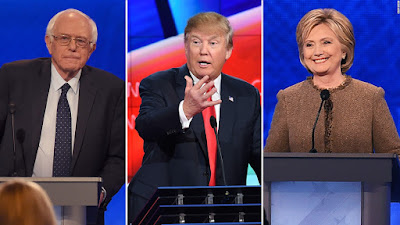 Not that it matters
Today, voters head to the booths for Super Tuesday and I wonder if that question is even relevant. Given my history with Americans and the U.S., given my visions written down the last 40+ years I've always said there would never be a political solution for a better future, only a spiritual one. For the people of the world, I'd rather ask the question Jack Kerouac asked: "Whither goest thou, America?".

In no other country than the U.S. do I see the fight between light vs. darkness, but I'll address that in a later column. For now, there's an election. Americans have a choice between three candidates, Bernie Sanders, Donald Trump, and Hillary Clinton.

Donald Trump is the likely GOP nominee, harvesting the worst impulses of people. He likely will never answer  21 questions for Donald Trump but it shows how head-shakingly bad he is. Still, if the American people want a demagogue..

The scarily amoral Hillary Clinton, who once before thought she was a shoe in for the White House, is facing a strong primary challenge from Vermont Senator Bernie Sanders. She might well carry Super Tuesday, with more support from the southern states, older women, black and Latino voting blocs she considers her own, guaranteed support. Sanders on the other hand has the support of many third party independents, young people of all backgrounds, and a wave of brand new voters inspired by his call for change. He has almost as many votes as Clinton, and it will not be easy for her all the way to the nomination. With Jupiter in his own sign of Virgo, then passing over his Mercury and Venus in Libra, I see great things for him going into November. And I can see why he's loved.

Hillary Clinton is not deserving of the office. Here's some of many reasons why, with links:

GMO's  with Hillary supporting GMO's and Bernie taking on Monsanto and demanding food labelling, well GMO crops are harmful to our health and the environment. With long term effects on bees and regular crops, she will oversee our food production fall under the hand of evil corporations.

Libya It's already well known that Hillary Clinton along with her advisers Samantha Powers and Susan Rice convinced president Obama to destroy Libya. It was then used as a springboard to attack Syria. The refugee crisis is her doing, yet here she is, getting a congratulatory e-mail for that. Americans deserve to be told the truth.

Fixing the race The Democratic National Committee not only fixes the rules in favour of the establishment, it is widely believed they will tilt it further to ensure Hillary wins. If that happens, Sander's voters will abandon the party and stay home, and the Democrats will lose Congress, as it has been doing since 2010.

Donald Trump can win the presidency In head to head polls, Americans have made it clear: in an election between Clinton and Trump, Donald Trump will win. On the other hand, the Democrats would most likely win both the presidency and Congress if Bernie Sanders were the nominee.

Pity. The late Howard Zinn called for a new popular movement. Americans want change, yet here we have a candidate, Clinton, who belongs to the past. I hope it will be Sanders vs. Trump in November, so Americans can decide what sort of change they want.

Americans are an idealistic, wonderful people. Knowing so many good friends there, you know that they are no where like the ugly sides in this presidential election.  I hope and wish all the best for America.