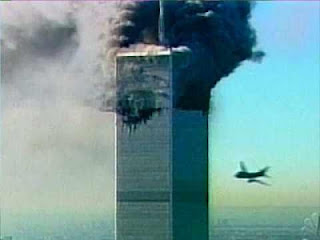 Eleven years ago, I was at a school meeting and then, in a computer store where there was a wall of monitors, all tuned to the news. I think it was around 10:30 in the morning. And there, on the screens, we watched the planes fly over and over again into the World Trade Center.

I had no thoughts, just that space of stillness that comes upon me when in the midst of that space of a dimensional shift. Yes, the world is about to change, I thought.

Then I was concerned about my disciple Jennifer in New York, whose story I wrote about in The Christ Sent His Disciple To New York I and II. And she survived miraculously, as written about here. That she fell  later, is just a story I share to say how everything that happened then, and will happen, depends on the choices made.

The world has changed a great deal since then. The war in Iraq and Afghanistan. The Arab Spring. The invasions of Libya and sponsoring of terrorism against Syria and Iran. The natural disasters of the Pakistani, Chinese, Haiti and Japan earthquakes, the Asian Tsunami, Katrina, and Japan tidal surges, the floods in Pakistan, the great environmental disasters of the BP oil spill, which I thought could not possibly be surpassed, only to have the nuclear reactors melt down in Fukushima and untold amounts of radiation spill into the Pacific Ocean. Millions died, untold millions more will die later.

Ah, but these are natural or man made disasters you say. No, they are caused by our collective karma, mapped out by astrology.which says yes, these will be interesting times. They are caused by our lack of spiritual awareness, our willful rationalizing idiocies. And they happen because until we wake up, they will continue to happen.

If there is one prophecy I have made, then it is this. Eons ago a war began on another planet that led to its destruction, and we look to repeat that mistake, over and over again. As I also made clear in War In The Heavens and other pieces, this war occurs across the dimensions, within ourselves and the many universes.

My father, with whom I have er, a complicated relationship, recently figured out what I've been doing the last    two decades. I had told him, but it didn't compute, till a cousin in Pakistan, who is very religious,  told him :) So he had to have a religious er, debate. And how many followers do you have, and why aren't you well known? His prophecies say this, and that. Mine are simple. Religions were meant to evolve, they didn't, and all these man made structures will one day come to an end. But no, Jesus won't come to slay the ungodly at Armageddon.

So what I did do, in all  this time, was write, and travel. There I was, standing on a big rock on top of the moors in Devon, having a vision of reaching people through my writing, and teaching them. What I have done since I was young. But since 9/11, it has intensified. I have been driven by the thought of how little time we have left, and even, I have left. (oh, I'll be around for a while, but do have a tendency to one day, disappear). So I have met thousands of people and taught them healing and meditation. The ideas I wrote about spread and reemerged all over the world. One day in 2002-2003 I checked Alexa, the internet ranking engine, and was surprised to see my web site was within the top 250,000 of the world, and I don't even know how people found the site. But find me, they did; those who search will always find me, even if I'm not as famous as I was then :)

So that is what happened in the last eleven years. I don't know how many people follow me now, nor is what I do dependent on numbers. I am not here to heal people, but help them. I am not here to fix the problems of the world, but, to help heal the planet. I wish it were not so difficult, but there you go. I still will do that, regardless. What I teach and do will help, one day.

I know who I am and what my path is. I wish the same for you.