I Heal The Unquiet Spirit 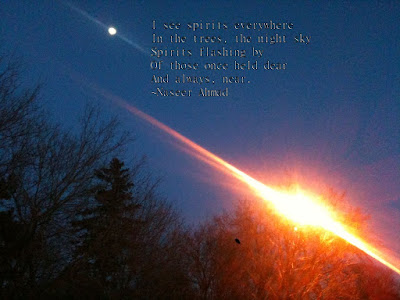 I see spirits everywhere
In the trees, the night sky
Spirits flashing by
Of those once held dear
And always, near.
~Naseer Ahmad
Arriving in London in 1950 I was surrounded by the spirits of 000's of people who died in the Blitz during WWII.
Tokyo, 1953, the 00,000's who died in Tokyo during American bombing raids and another million killed in Korea by US bombers based in Japan.
Spirits (those who have passed and those still attached to bodies :) are drawn to me for healing; this is what I do.
Over the years I have done a lot of exorcisms, cases of demonic possession (the other side of mental illness) battle of angels vs demons in the heavens, a war for the soul of humanity (which I've written about in hundreds of articles in this blog and countless places elsewhere on social media. I teach, but if people can't learn or change, I move on, as I am too sensitive to be anything but neutral).
Except when it affects my family.

I recently became aware of something I'd sensed but finally confirmed.
We went to Hungary in 1996, to visit my wife's family Travels With Agnes

While there I healed a great many people, but also broke many eggs.
Staying with her maternal grandmother, we noticed she was being neglected by her son. She had a fruit/vegetable garden and chickens, but he took the produce and eggs for his own family's use and left her with the bare minimum. Also intercepted the post man with her pension check every month and held on to her bank pass book.

I encouraged Agnes to go to the bank and confront her uncle. He got all defensive and promised to look after his mom better. While there I gave him two healing treatments and noted he had a heart condition. My diagnosis was based on an imbalance within his heart chakra which as it turned out had to do with hurt feelings in his relationship with his mom.

When you have an imbalance in one chakra you try to compensate by imbalances in other areas of your life, here in accumulating material goods. He also took over the estate of another relative who owned a villa overlooking the Danube worth millions by getting the surviving relatives to sign over their interest by lying about the government's intention to take over the property.

He was so threatened by fear of exposure he told everyone we were trying to take over his mom's bank account!

He passed away last year from heart failure, but Agnes only recently was told the extent of the negativity he had directed at her. Even her own cousin was turned against her. When you sense something, but do not know, the hurt can be much worse.

His spirit came to us filled with remorse. You can only heal the unquiet spirit, and let it go. But this isn't about his actions in life, it's the effect on the living. We carry generations of karmic damage within us, and it's up to us to heal ourselves, and not pass it on. Or we come back, and repeat the messes we make, and the lessons unlearned.