A Vast Movement Of Peoples 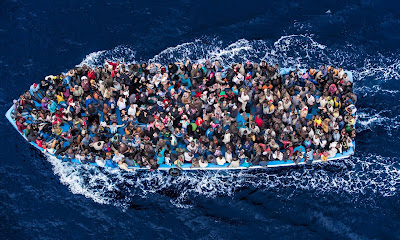 Not again
From an unpublished manuscript, The Way Of Atlan, London 1976-77: "There will be a vast movement of peoples across the world".

Sometimes, seeing the future is a terrible thing. But there you go. I went through an intense period of time from 1974 - 1977, where I saw all my past lives, and, I saw the future of the world. It was a bleak vision, full of hope for possible change, but also, knowing how people resist change, and therefore, make the future fixed.

The exodus of boat people from Vietnam began the next year in 1978 and continued till the 90's. This is part of human history, the vast movement of peoples from devastated lands to newer places offering, hopefully, a better existence.

It is part of my DNA, people from the planets Aergon and Atlan fleeing destruction, the end of the Lemuria and Atlantis based empires. My father was part of the 2-3 million exodus that accompanied the separation of India and Pakistan, in which nearly a million people died of violence.

Whether they fled in spaceships, or ships, on foot or train and bus, there was an uprooting which is carried within our psyche. And now, once again, as vast numbers flee the destruction of Afghanistan, Libya, Iraq, Syria. These are the signs I saw, how we continue the patterns of history and our collective karma.

It will continue till we change. I hope we do. I made a commitment to try and help people, but you do not know how difficult the path ahead will be, and, you will need to ask.