A personal history of India and Pakistan 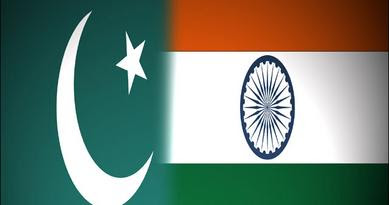 I wrote the following in my December 21, 2007 article The End Of The World: "this coming full moon, on the 23rd-24th, is an especially powerful one. with planetary aspects shifting from the Sun and Moon, Mars, Jupiter and Pluto, the Galactic Center, and the solstice. Expect some dramatic shift, on the planet or within yourself between now and the end of the year. Be careful to avoid disaster. Embrace the lessons you must learn".

This message was addressed to every person in the world, and came after a healing meditation I did on December 16. I warned you many times, I bring great change, and there will be more to come.

On December 27, ex-Pakistani PM Benazir Bhutto was assassinated as she campaigned for another term in office. Incidentally she was killed in the same park where a previous PM, Liaquat Ali Khan, was assassinated in 1951. That she was a brave human being I acknowledge; that she was part of a corrupt society and elite which routinely oppressed and killed others I know. It even appears that she had her own brother killed, as a threat to her power when PM, and in the end she reaped her own karma. Incidentally, she went to school with my brother, and I was talking about her just a month ago. My message was to her as well, but now, she, like us all, must embrace the lesson we must learn in the year to come.


Still, since Pakistan is in the news now, a personal history is called for.


India has always been a crossroads of traders, invaders, and civilizations. The original inhabitants were Dravidian animists, who worshipped nature and the spirits dwelling within it. Later Babylonian Sumerian Egyptian influences can be found in the ruins of the cities of Moenjodaro and Harappa, which existed in the Indus valley around 3000 B.C. Aryan invaders destroyed the civilizations around 1550 B.C. and pushed the darker skinned Dravidians further south.
Hinduism and Buddhism became the religions of India, then the Islamic invasions of the early 8th century A.D. added a third to the mix. Successive waves of Muslim invaders took over most of the country, and while they assimilated themselves into the Indian culture they were, because of their military superiority and appeal to marginalised Hindus, a very strong influence in Indian history. Much of the animosity between Hindus and Muslims stems from this thousand- year period of Muslim dominance.

My parents were Indian Muslims, mom's family from Hyderabad Deccan, and dad from Uttar Pradesh in the mountains of Northern India. My family has a tradition of physicians on the one side and Sufi Muslim saints on the other. I am a Syed, a descendant of the Prophet Muhammad, but from my earliest memory I was never a Muslim, my belief systems ran more towards Buddhist and Hindu Philosophy. Yet, if there is a Muslim that appeals to me it would be Dara Shikoh, the Mughal prince that should have been Emperor, who sought the common aspects of all the religions of the world, and Sheikh Abdul Qader Jilani, the Sufi mystic who was my ancestor. I will write more about Islam later, but this is about the people of India and Pakistan, and their shared history and karma.

When the Indian subcontinent was divided in 1947 between Hindu India and Muslim Pakistan, my parents were forced to move to Pakistan. Several hundred thousand people on both sides were killed in communal violence. I was born in Lahore, Pakistan, but my roots lie in India. So I love both countries, and don’t see any conflict in that.

When India was partitioned the agreement was that areas under direct British control were to be divided on the basis of religion, so Muslim areas would go to Pakistan, Hindu areas to India, and the semi-independent princely states were to hold elections to decide which way the people wanted to go. West and East Pakistan was formed earlier, but there were three states that could go either way. Hyderabad and Junagadh, with Muslim rulers but a Hindu majority population, were annexed right away by India but the Hindu ruler of Kashmir, with a majority Muslim population, delayed holding a vote. When tribal soldiers under Pakistani control invaded Kashmir, the Maharajah ceded the state to India. The two countries went to war and the United Nations had to force a ceasefire in 1949, with both sides promising to hold a plebiscite to allow the people to decide their future. To date that hasn't happened. Here's a background on that:

The people of Kashmir, if given a choice, would rather have their own state, but it's unlikely that either India or Pakistan would allow that to happen.

The sources of many of India and Pakistan’s rivers are in Kashmir, and if India were to allow Kashmir to leave the Union, the Punjab’s Sikhs would likely be next, and India has already fought a dirty war to keep the Sikhs within the fold.

India and Pakistan have fought 4 wars so far, in 1947-1949, 1965, 1971 and 1999. This time around, both sides have the Bomb, so are unlikely to use it, as it would finish the Central Asian Oil pipeline project. It would also destabilise the region. The chances of another conventional war is still there, so watch for developments over the next few days.

My father was a diplomat, (Corr: he wasn't the ambassador, in the accepted sense of 'diplomat'. he was in the foreign service)  so I grew up in England and Japan. Even learned Japanese, now forgotten, alas. I had no feeling of belonging to any one religion , so instead choose a more universal Buddhist-Hindu philosophy and personal spiritual belief system that draw heavily on the secret history of the original races of humanity.

When dad's posting to America fell through we returned to Pakistan where I finished University. Most of my family was in the military, so I went to Air Force school but failed the medical exam to join the Air Force. Another door opened, and while I went to Canada in 1970, many of my friends on both sides of the border fought (and died) in the 1971 war.

If left alone, the people of India and Pakistan would be at peace. They have the same root culture, but are divided by religion and a thousand years of divisive politics. Wherever I go, I have a common bond with Indians, Pakistanis, Muslims, Hindus and Buddhists. Many of the thinking people would choose to live together in peace and work together to solve the common problems of the subcontinent. There is a quiet anti-war movement on both sides of the border, but jingoistic politicians, single-minded military men, and religious leaders drown their voices out. Both sides have worked to destabilise the other country, with assassinations, sabotage and atrocities committed by so-called terrorists.

There has to be a solution to the Kashmiri conflict. The Kashmiris had self-rule until 1989, when a heavy-handed federal Indian government took over the state government of Farooq Abdullah. India has committed gross human rights violations as documented by Amnesty and Human Rights International. Over 50,000 Kashmiris have been killed. Guerrillas operating from the Pakistani side have also committed atrocities. Only International mediation would solve it, but International interests ARE at play here, so let’s keep the world (and India and Pakistan) in a permanent state of weakness.


Pakistan used to be a pretty tolerable state when I lived there. No longer; it got involved in Afghanistan and has descended into violence and drugs. It is incredibly corrupt and run by a military cabal. The civilian 'democratic' institutions are worse, if that were possible. India looks down with smugness at its enemy's problems, while the forces of globalisation eat away at its own very fabric and culture, destroys it's small scale agriculture and creates an ecological disaster. Both sides are held together by the karma of their joint birth.

If left alone, both sides could eventually solve their problems, but are stuck in a state of mutual hostility and paranoid distrust. I can’t change that, the people who belong there will have to wake up and work for it.


This is the problem: Neither side is in a true state of spirituality. Ironic, considering the numbers of fake gurus and teachers inundating the West. The two countries where so many great religions flourished is possessed by the illness of the world, the pursuit of money and power. Neither side can act in good faith. The extremely rich and snobbish elites that could make a difference, couldn't be bothered. The rest are stuck in a fatalistic philosophy of karma=kismet. This will only change if they choose to follow me. And if not, whatever must happen, will, and the lives of the rich and powerful will be as dust.

I, who once was Krishna, the Christ who sought refuge in India; the Mahdi and hidden Imam who will heal Islam cannot return to the country of my birth until the people are ready.


My work is in North America, because I believe that the solutions to the problems of the world will come from here.

Email ThisBlogThis!Share to TwitterShare to FacebookShare to Pinterest
Labels: India and Pakistan

Thank you, that was a good read.

how were u christ or krishna?

That's who I was in previous lives, Salman, and I'm back to teach further.

well Man, come on, many other people have declared themselves to be Christ re-incarnated.

I agree. Lots of people have. But the prophecies say he will return. So, one of them will be the true one.
I've written about the miracles I've done, but so what? Everyone has power, anyone can perform miracles, then people would ask if it comes from Satan.
I'm supposed to bring peace inside people, and if I help, then that's all that matters. People will meet me, or they will read my books.
After that it's up to them to believe. Or not.

u might as well become Muslim then, because Islam guarantees peace!!!

Religion promises peace, but I show how.

To claim to be anything more than an atom at the lotus feet of Krishna is adharma.

Unless the claim's true. The Muslims, Hindus, Jews all want their being to come, born in the holiest of holy situations, exactly according to prophecy. Do they deserve it? The moving finger, having writ, moves on, and the prophecy, when the people fail it, moves on.