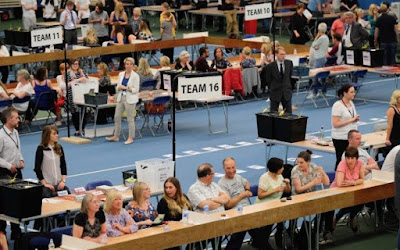 The British people have spoken
And now, what's next?

First, it was so good to see actual paper ballots being counted and the people's voice being heard, unlike the shenanigans in the U.S. as the Democratic Party openly commits electoral fraud and disqualifies so many voters at the primary level.

Second, yes, voters have made their choice clear and I respect that. I  also believe their vote, made perhaps out of fear and anger, was the right one. The Leave politicians, forget their xenophobic fear mongering, lied to them about the economic consequences of that decision, so yes, unfortunately, I expect serious fall out.
Why, then, do I believe it's the right choice?

If you look at my dozens of posts on Europe and the U.K. on this blog you'll see.

This is what war, invasions of other countries, and unfettered greed does to you, and if you don't like the consequences, sorry.

You don't even like solutions that take you outside your comfort level, so what can I say?

Since I believe in freedom of choice, I accept people's decisions. But then, hopefully, as you realize your mistake, hopefully you move to the right place to be, which is spiritual, not material.

Whither Goest Thou, America? And if you can't decide, then maybe, you need a President Trump though honestly, President Hillary will be worse.

I dunno. You decide.

Email ThisBlogThis!Share to TwitterShare to FacebookShare to Pinterest
Labels: Brexit

Bees And The Fertility Crisis 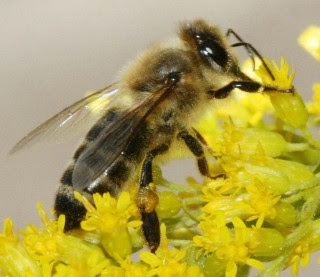 And when they're gone, what about us?

Bees, or apis mellifari have been under environmental attack for some time, and for a while it looked like massive colony collapses across North America would lead to the endangerment of 60% of our food crops that require bee pollination.
The neonicotinoid family of pesticides manufactured by Bayer/Syngenta and widely used in agriculture appears to be the major cause of this environmental disaster. Europe, Russia, China and Japan and Europe have banned or restricted its use.
"$3 million dollar grant from the Environmental Protection Agency (EPA) has led the team of researchers at Monsanto to develop alternative strategies to “survive” an eventual honey bee Colony collapse disorder (CCD), a phenomenon that has been increasing in the past decade and that occurs when the majority of worker bees in a colony disappear, a situation that could “dramatically impact the world’s food supply”, admit experts."
“Latest studies have found a link between neonicotinoid pesticides that are vastly used in GE corn crops. (Note: in other major farms crops too) As GE farming has become an essential part of agriculture in today’s modern world, we had to develop ways to promote both the continuity of GE farming and the survival of the honey bees, a fascinating challenge” admits John Leere, head biochemist of the project.
Studies also show the massive use of herbicides may have an effect on native flowering pollinator plants bees require to survive.
This brings to the fertility crisis affecting the planet. In ancient times, bees represented fertility, and prosperity. Now you see a huge decline in fertility rates (and in personal wealth). A 2015 study found "There is a global decline in the number of children born to each woman; each woman has half as many children as her counterpart did in 1972. In Canada (2006 data) there were about 1.5 births per woman; 2.1 would be required to maintain the population".

I saw this in vision: the great karma we would be bearing through our children, and, how so many would, no matter how much they wished, be unable to conceive.

I wrote and taught, and helped many overcome these difficulties, From The Street of Babies to Baby Point Rd. but till the fault in us is resolved, there will continue to be fewer children born, and more, with birth defects.

Environmental pioneer Rachel Carson (1907-1964) in her book Silent Spring observed the effect of  widespread pesticide use on other species but warned it could also cause fertility problems and birth defects in humans as well. She also noted that many species affected by pesticides were at higher risk for cancer.
It has now been proven that environmental pollution and chemicals including cosmetics and germicides affect fertility. Birth defects, learning disorders, gene manipulation all follow pesticide and herbicide spraying.

We can heal the planet, but also, we must heal our selves. There are deep karmic issues we engender through our children.

I leave you with this thought. When we moved into our home, there were no bees in our garden.

Then, with healing, the bees returned.