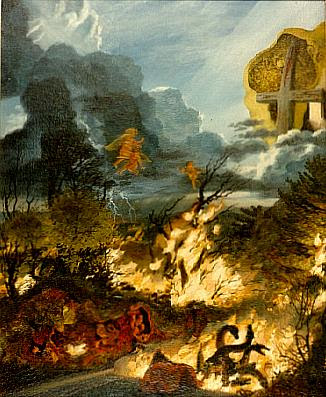 I posted this in 2001 on my website. Since that time, I've seen a worsening of the human condition, with no solutions presented. Religion promises salvation and magical beings to appear at a time of great danger, the End Times.

Shamans say only that these will be interesting times, where we will have to decide between our destructive ways or walk a spiritual path. New Agers see an enveloping peace where we will all meditate together, and rational humanists propose we band together for a common cause, power to the people.

They're all right of course, but can't seem to respect or agree with each other or propose an effective course of action, and wait, helplessly. Humanity still has too much to learn, it seems, but now time has run out. As I said, you will not be permitted to destroy the planet.
Here's the article. I'll be posting again to develop these themes.
Christ, Anti-Christ and Armageddon
A Toronto health food store owner recently took great offense at the claims made here on this web-site. You're coming from a space of ego, you think you're better than us all, you ought to be humble, he was yelling and screaming in his store. Wow, I said, I just came in to buy a bottle of Cod Liver Oil. And why're you so angry?

Another person asked, since there were so many others making such claims, how to know what was real?

My answer to all of you is that the terms Christ, Messiah, Maitreya are all names you have created to try to understand from your own perspective. I, who once was Jesus, Krishna/ Kalki, Buddha, am here as Naseer Ahmad, a Teacher, trying to explain in words you can understand: I am he that the world has waited for. The proof is in my work, my healing and the peace I leave behind. The miracles you ask for are already inside you.

In these times it is easy to see prophecy take place. But which one will it be? The Hindu Buddhist Jewish Christian or Muslim? They all apply at this time so perhaps the prophecies all describe the same event and even the same being. The Native American and Maya describe this as an interesting end- time. Krishna Kalki will destroy to save the world. The Messiah will redeem the land of Israel. Jesus Christ will fight the battle of Armageddon, no, he'll fight to save the Muslims.
Since it's so easy to believe in an external Satan, it's easy to believe in Christ and Anti-Christ. Good vs evil, darkness vs light. So easy, in the face of all the evil that is being done now, to believe in evil beings. Not us, but they, he, it. But evil exists inside all of us. Have we not condoned evil? The carpet bombing of Afghanistan, the creeping genocide of the Palestinian people, the ten- year blockade of Iraq that has killed three quarters of a million children, the rape of Africa? So believe, if you will, that it is the oppressed who are evil. Believe in a horde of Arabs invading poor little Israel and the Messiah killing them all on the plains of Armageddon.
The true battle will take place inside you. You will wake up from your sleep and see what is real, or you will not. You will fight to change the world, or you will not. Your weapons will be not bombs, terror, or killing, but magic, spirit, and love.
Is there a Christ or an Anti-Christ? Yes, but not in the way you believe. The Anti-Christ is the energy of fear, control, and resistance to change that exists in all of us. The Christ exists in all of us too, in the goodness that is there.
So don't expect this supernatural being to show up, one who conforms to your myths and belief systems, and who will solve all the problems of the world. The saving of the world depends on you, not I.
The Phoenix is my symbol. It represents humanity going through the pain of fire, and being reborn. I am here to demand justice for the poor and oppressed of the world, and it matters not, whether you believe in me or not. But to find God, you will have to go through me. I bring you peace, love and joy.
©- Naseer Ahmad-2001

First, congratulations on your new blog :-)

You know I have different opinion :-), but I salute to you for asking hard questions. Most people are afraid to face these questions- who are we and why are we in this world.

Glad we have freedom of speech :-)

Do we have freedom of speech? Not really, but we should defend it nevertheless.