Saving the rich from themselves 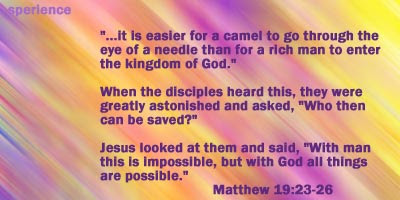 Matth: 19:23: Then said Jesus unto his disciples, Verily I say unto you, That a rich man shall hardly enter into the Kingdom of Heaven.

Ah, but do they really want to, or believe?

Every once in a while I meet the really, really rich. Not Rothschild rich, but more than I ever hope to have in this life anyway :) It’s an exercise, for me, and them.

Every spiritual teacher hopes to either: win the lottery, get a rich sponsor, or, lots of followers so they Could Do Good. Well, if your dharma is to teach, you will, whether you’re rich or not.

I learned early enough the power of how I could be rich, if I was prepared to compromise. I couldn't, and so, never did. I also have a principle; that if one helped me, in whatever way they could, then so too, would I help them. This brings me to the multi-million-billion-trillionaires I met.

Los Angeles 1993: This banker who owned a California bank, the one that financed film and oil deals, a front for the Mafia, came to see me. His wife had a back problem; I fixed that. When I treated him, the energy release of his sins and karma was so powerful that a glass book case shattered by it self. I saw, through my hands, the souls of the really rich.

We lived up the road from Stephen Spielberg and down from a Rothschild. Invited them both to a meditation. Neither showed up, alas.

Malibu 1993: This real-estate tycoon had a mansion where he’d be filming a porn movie on a Friday and hosting my meditation class on a Saturday. But he was kind to us, so I resolved to do what I could. The IRS was after him for 30 million, and I said I’d help. The next week the amount was reduced to 5 million, which he was happy to pay. Did he slip me a little something? No, but he certainly tried to pump me for more help. In the end, when we left California it was an ordinary person who used his credit card to fix my tires and brakes so we could go on to Texas.

Toronto 2000: A Filipino lady came to see me for spiritual healing. Her step-mother it turned out was a follower of a spiritual healer in the Philippines, who’d discovered one of the Japanese treasure hoards of Chinese gold and jewels from WWII.. a friend of the Marcos. The CIA was all over them; she’d already been cheated by people she trusted. Could I help them? By an interesting coincidence, my cousin headed a bank in the Philippines at the time. I might have helped, but it just wasn’t right, so I didn’t. Incidentally, she was the lady described in “The Christ sent his Disciple to New York”.

Iran 2007: I was approached by an Iranian businessman front for politicians who wanted me to help him get access to frozen bank accounts in the West. Now I’m no James Bond, nor am I a business man. I pray for people, and they are helped, if it serves a reason. First, there would be a test. An Iranian in London had a stroke; doctors couldn't get him out of a coma. I said I would help, and sure enough, he recovered completely. My friend won a court case and sold a property. His brother, a drug addict, was cured. But as to the bank accounts, there seemed something wrong about them, so that was that. I was there to create a nascent spiritual movement, and I did, and prevent war and an earthquake in Tehran, and that was also done. While there I met some incredibly rich people, and again and again, saw the compromises they had to make and how in the end, in gaining all the riches of the world, they gave up their souls. The power of the ego that enabled them to accomplish the material blocked them in attaining the spiritual.

I could make a living in my practice, and sell books, and one day perhaps, the movies would be made. (Hollywood was an experience in itself)

Yet again and again, the very rich came to me, seeing that I cared little for their trappings, and looking with longing at the peace within myself. Sooner or later, they’d run away, because the price of following me was too high..

Do I have certain powers? Yes, but they’re gifts, never to be misused. So I’m not here to help rich people become richer.

Is there a rich person who’s honest and incorruptible? I’m sure there is, just haven’t met any :)

Hi Naseer,
A very relevant article indeed - thank you very much! Sending you all love, peace and joy for the holidays. And may your new year bring you everything that you need;)
Love Always,
CC

And you too, Chaieomie xoxoxo

hp, when you said you were down to a few thousand shekels, I prayed for all the best for you. May the new year bring all that is good to you.

Question - not that it is relevant to the article, but was the banker a J*#?

Not relevant, and he was Italian.