Peace breaks out in Korea? 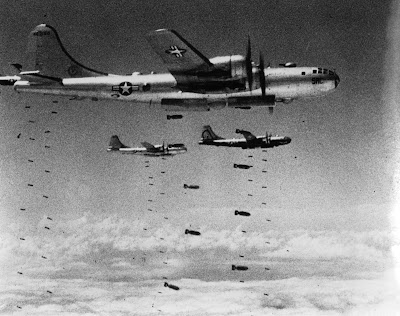 Americans have forgotten what we did to North Korea
That act was this: In the early 1950s, during the Korean War, the US dropped more bombs on North Korea than it had dropped in the entire Pacific theater during World War II. This carpet bombing, which included 32,000 tons of napalm, often deliberately targeted civilian as well as military targets, devastating the country far beyond what was necessary to fight the war. Whole cities were destroyed, with many thousands (estimated: hundreds of thousands) of innocent civilians killed and many more left homeless and hungry.
The Korean War: Barbarism Unleashed
An excellent history and resource guide from the "United States Foreign Policy" site. I hadn't realized that Picasso did a painting to match his more famous "Guernica" one-guess Americans don't recognize their inner Nazi.
﻿ 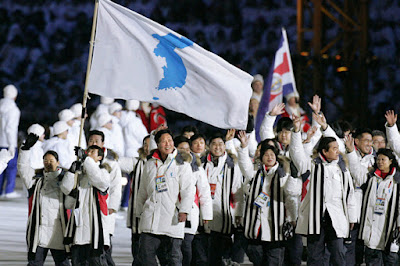 Seoul Winter Olympics 2018~The Unified Korea flag.
I'd been in a deep and dark place since 2014, but this picture and the events leading up to the Winter Olympics, and after, moved me more than anything else.
From an article I wrote in 2014 Why?
Everything happens for a reason.
April is the longest month.

Tomorrow, April 23, will be a very difficult day, as a Jupiter Mars Pluto Uranus Grand Cross becomes exact at 13 degrees of the cardinal signs, affecting people and countries ruled by Capricorn, Aries, Cancer and Libra. (The US, which I have had my eye on for some time, is ruled by Cancer. Some say the Russian Federation is ruled by Capricorn)

This aspect was felt for more than a month now, and will be felt, with waning aspects in the month to come. There will be great changes all over, and how and when it affects you, depends on the choices you make.

It referenced the Jeju Island ferry disaster of April 16, 2014 (read the article please) but also the changes to come in America and Russia. Little did I know of the changes to come in me personally since that time (I'm a Capricorn, LOL and ahem) and the whole, connected to Korea.
Yes, I'm a pedantic history and foreign policy wonk but my focus has always been spiritual so this is the pen I'm writing with. I must say, who knew the events that would come to finally, hopefully, lead to peace in Korea, and then the world? Never mind the hatred many feel for Trump; I applaud his summits in Singapore with North Korean leader Kim Jong-Un (a fellow Capricorn :) then Russian Federation president Vladimir Putin in Helsinki later this year. I will always advocate and hope for peace even as I see the world being possessed by demons, sorry. Love and the spiritual are the only answers.

Oddly, it was a Republican president-nominee, Dwight D. Eisenhower, who visited Korea in 1952
1952 Eisenhower goes to Korea then as president made good his campaign promise by signing an armistice with China and Korea. The Democrats had wanted to continue the war-the more things change, the more they remain the same.

Oddly, it was the brilliant Seven Days In May movie (1964) by John Frankenheimer that showed an American president who signed a peace treaty with Russia then when the senate ratified it American power structures conspired to stage a coup against him. Given the levels of anger against Trump meeting Putin, I wonder if moves against him constitute a coup against a duly elected president? 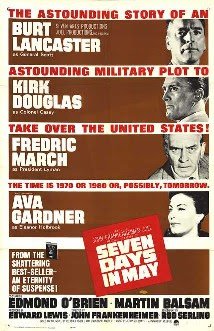 Finally, it was the Korean people themselves, who demanded an end to the conflict and removed the corrupt South Korean presidents Park Geun-hye and Chun Doo-hwan (who massacred thousands of protestors in the 1980 Gwangju Uprising) who made this possible, not the US. Even then, it was touch and go as military leaders planned a possible coup to keep the president in power
Did South Korea army plot coup to keep ousted leader in power?