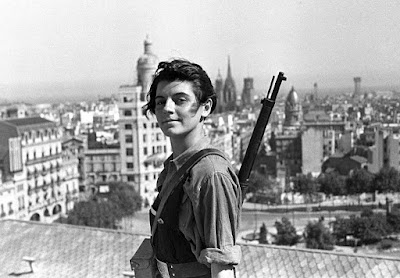 Barcelona, 1936
The people of Catalonia will vote October 01, 2017 in a referendum to decide if they want to secede from Spain. Catalonia's High Court and Spain's Constitutional Court have already declared the referendum illegal. The minority right wing government of Spanish Prime Minister Mariano Rajoy has seized millions of ballots and moved troops and Gardia Civil  police to prevent the vote, and hundreds of thousands of Catalans have taken to the streets to defend their right to self determination. How did it come to this?
The Catalan Revolt
Originally a principality within Aragon, it lost its independence during the war of Spanish Succession in the 18th century, though Catalan Nationalism resurged in the mid 19th century with the promoting of their language and culture. But the Catalan Revolt goes back a lot further; its political tradition of independence The rebellious nature of Catalans has been noted since 1285.
Catalonia was awarded limited autonomy in 1931 by the Socialist Government of Spain but there still was unrest. The right won back government in 1933 and the Catalan Independence Declaration of 1934 was defeated by troops and autonomy suspended. This, and the Asturias miner's strike led to the Spanish Civil War of 1936-38. Spanish dictator Francisco Franco imposed a new constitution depriving Catalonia of autonomy though it continued to agitate, driven by its 'rebellious nature' perhaps?
The present drive for autonomy:
Politico Magazine: Catalonia referendum: How did we get here?

The October 1 vote is the culmination of a fallout between Barcelona and Madrid that started in 2003, when Catalonia sought a deal to increase autonomy — and failed.

Even though separatist parties were elected to the regional parliament and tried to negotiate greater autonomy on terms of language and finance, the central government and Constitutional Court, perhaps not acting in good faith, watered down and rejected almost all the proposals. When the final decision was handed down in 2010, a million people protested in Barcelona "We are a nation, we decide!".

With each request for negotiation being denied the movement for an independence referendum grows. The central government is caught conspiring with news agencies to discredit separatist officials.


The Catalan parliament passes a referendum law and the regional government formally calls the October 1 referendum on secession from Spain. The parliament also passes a law that would regulate the transition to independence if there was a Yes vote. Madrid's central government says these laws represent the "death of democracy" and brings them to the Constitutional Court, which calls for an immediate suspension. The Socialists and Ciudadanos support Rajoy's call to stop the vote.

This is where we're at now. What next, after October 01? Funny, but I wrote a chapter in my book
Man From Atlan and it's called The Man Of Spain-1936 A.D.

You can read it here

It's a work of fiction, it's a true story of my past life in Catalonia. It's not a story about politics though set in the background of the Spanish Civil War, it's a love story about a man who avoids war but is forced again and again, to fight for his ideals. Some excerpts:


The Bull had always been there in the field that he passed by on his way to school. He remembered the first day. He had looked into the field and saw far away the proud black figure of the Bull. "Ay, Toro," he whispered and knew the Bull heard him. He had seen it there every day for many years, and always it was the same as on the first day. He was as it was and one day he would fight it.

The father looked at him sadly, knowing that his son was set on becoming a matador. "I had hoped you would be a doctor."

"Because this is what Catalonia needs. It is growing so fast, and already people are realizing how much we're lacking in the people we need. Scientists, engineers, doctors. Soon we will need them even more."

"Because one day we will be independent."

From then on, they talked often about the politics and history of Catalonia. Rapidly becoming one of the most industrialized areas in Spain, Catalonia resented the tariffs the other more influential provinces were putting on their products, so that it was at a disadvantage. The Catalans had always felt different from the rest of the Spanish peoples and for many years agitated for a separate homeland. Its industrial base, its trade unions and political parties were lifting its people out from the poverty which was still rife in the rest of Spain. It was a problem to the government in Madrid.

Yet because it was a problem which hadn't been solved for so long, the extremists were coming to the fore. Political murders were being committed almost every day in Barcelona, the capital. There were moderate people like his father who wanted Catalonia to have more independence but still be a part of Spain. Yet, they had been crushed so many times whenever they agitated for freedom for Catalonia that the moderates and the militants together planned for a time when Catalonia could declare its independence.

These were things which meant everything to the people of Catalonia, yet his father could see they meant nothing to him. His son wanted to be a matador, so let it run its course and in time it would die, as did all the dreams of children.

He knew it would not, for he saw the Bull waiting for him.

Read the rest; it's a lovely story I think. It was a glorious time, fighting for a good cause, not "Independence" but people who resisted fascism. No, I wasn't too fond of the communists and anarchists who splintered the Spanish loyalists but it's a wonderful memory, still.


Marina Ginestà, who has died aged 94, was believed to have been the last surviving French veteran of the Spanish Civil War. As a 17-year-old member of Spain’s Unified Socialist Youth she was immortalised in a photograph taken on the roof of the Hotel Colón in Barcelona in the first flames of the conflict; it was to become one of the most famous photographs of the war.


What next for Spain?

Looking at its national horoscope, I don't see independence for Catalonia but Spain will suffer in its association with other regions and with Europe. There will be continued unrest as people demand an end to austerity policies and its economy takes several hits. There will be continued repression, and while I don't think people really wanted to be independent, just a greater autonomy within Spain, the central government's heavy response can only make people more willing to split with it.

A final word from:


GENEVA (28 September 2017) - UN experts* have called on the Spanish authorities to ensure that measures taken ahead of the Catalan referendum on 1 October do not interfere with the fundamental rights to freedom of expression, assembly and association, and public participation.

And there you have it. Maybe Catalonia does not have a constitutional right to secede. But the government's actions have been an appalling violation of human rights. I wish the people of Spain, and Catalonia, well.