A Sufi State of Mind 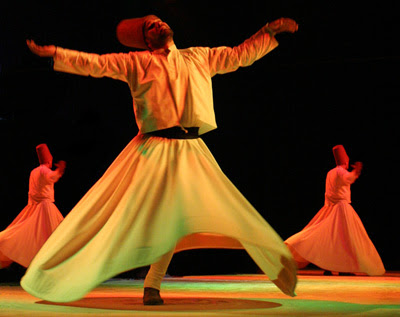 Just to make it clear: Sufism, while it has profoundly influenced Islam, is NOT Islam. Islam is a strict monotheistic religion that hasn't reconciled the split between Shia and Sunni, how then can it admit a third, very different version?

Still, here are two websites that explain the differences quite well:

The fact is that Sufism retains at its core, the neo-platonic influences that came into being after the time of the Umayyad Caliphs of Baghdad. It is a form of Gnosis, `the apprehension of divine realities'. Some say, the word Sufi comes from 'soof' the woolen coat they wear on initiation to the order. Some say it comes from 'soph' or Sophia, the Greek word meaning 'knowledge'. Regardless, the fact remains that Sufism in its many forms exists across the entire Islamic world, has expanded into the West as an alternative philosophy that attracts those of of a mystical intellectual bent, and even influences national resistance movements that extend from the Caucasus to Northern Pakistan.

I don't wish to denigrate any religion or spiritual practice. As I have said before, my own family has a very strong Sufi background. But in searching for a way to help other people, these are the questions I came across.

For what is the core of religion? Of spirituality? Of mysticism? Each time, it is to experience, to know, 'the divine realities' and our relationship to those realities?

The answer, very simple, is this. We can all, one day, experience and know that reality which is God because it exists within us. We can experience it in several ways, as meditation, as ecstasy, as dance, as the movement of healing energies within ourselves. Every person has their own unique experience and way to that ultimate reality, and indeed for some, the experience of Sufi practice may be just right for many.

But this is what I offer. The real knowing of God lies, not within the 'mystical' experience, not the awe that comes from viewing a magnificent church, the simplicity of meditation, or the ecstasy of music and dance.

It comes from the absolute stillness that fills, when we touch, however briefly, the void within, us.

And the knowing comes from the peace, left behind.